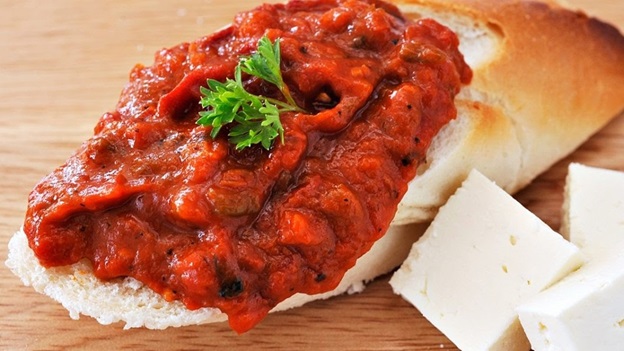 Lutenica is a sweet, tangy, spicy tomato sauce that is used as a topping, spread or as a sauce in many dishes. This dish is the most traditional food in Bulgaria and is usually prepared at home and sold in jars. It is made up of peppers, carrots, garlic, vegetable oil, salt, sugar, aubergines, and tomatoes. It comes in various varieties like with spicy peppers or eggplant, smooth with bits, etc. It is found almost in every household in Bulgaria. It is one of the most traditional Bulgarian dishes. The families use to prepare it together.

It is also popular in Serbia and Macedonia. However, it is known by different names and a bit different in taste too. It is often eaten with meats or used as a spread on bread or sandwiches. The production of lutenica has been incredibly increased in recent years. Lutenica is also spelled as Ljutenica.

What will be required to make lutenica?

To make lutenica at home, you would require the following things-

How to make Lutenica at home?

The Bulgarian lutenica contains ingredients like tomato, salts, and peppers, which contains many vitamins and minerals. The ingredients contained in it are easy to digest and also helps to improve metabolism. It does not contain any added preservatives. In addition to that, it also helps to remove harmful substances out of the body by better digestion and improved metabolism. It is 100 percent natural so it is healthy for the body.

Although there are different variants of lutenica. Some people include eggplant in their recipe whereas some don’t. This sauce is quite spicy and has various benefits. Spicy food is said to be good for the body. It strengthens our immunity system and has antibacterial properties.

Another advantage of Bulgarian lutenica is that we can preserve it for a long time. It is very easy to make. It also adds taste to various dishes like sandwiches, bread, etc.

That being said, Bulgarian lutenica is a must-try dish once in your lifetime.